The fort constructed by Major John Whistler and his men during 1815-1816 was the last of three American forts to stand at the junction of the St. Mary’s, St. Joseph, and Maumee Rivers. It was designed to be easily defended against a Native American attack by a garrison of only 50 to 75 men. With two lines of pickets, heavy gates, and well-placed blockhouses, it was impossible to penetrate. This fort was by far the most sophisticated and carefully designed all-wooden fort ever built in North America. It was not fear of the Native Americans, but rather the rapid westward movement of the frontier that caused Fort Wayne to be abandoned after only three years of use. It was decommissioned April 19, 1819. 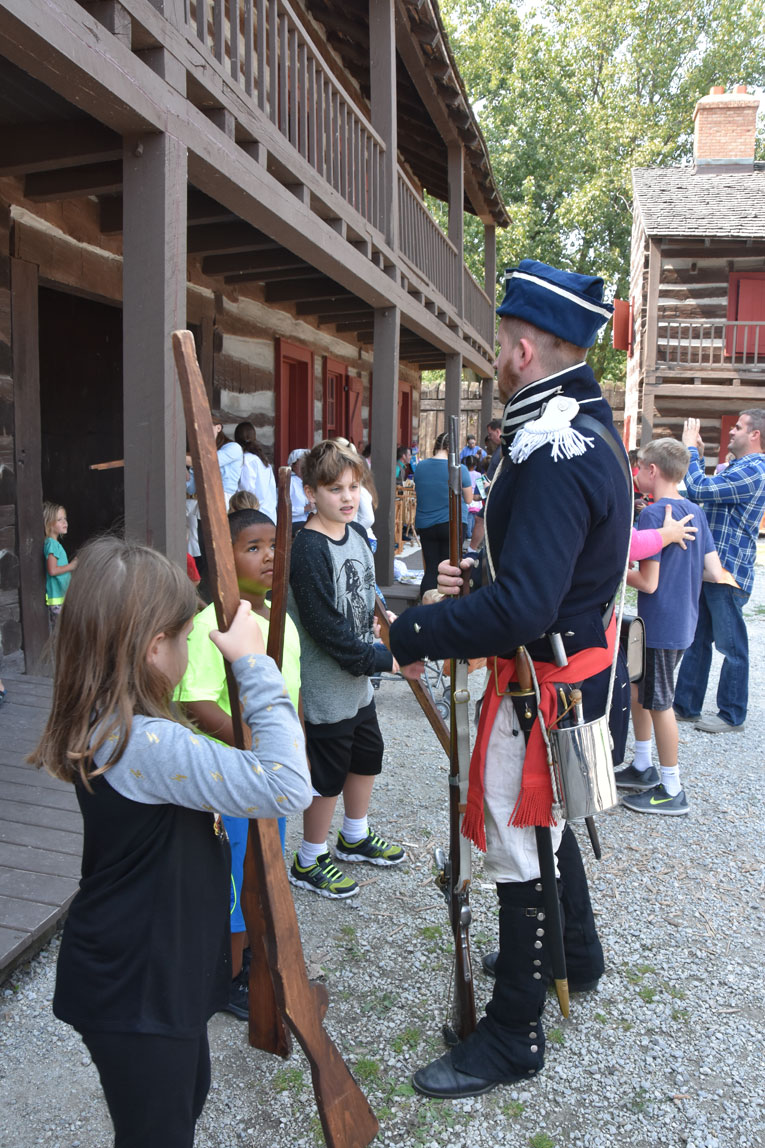 The Old Fort is a faithful copy of the post built by American troops under the command of Major John Whistler. Through the efforts of many dedicated citizens of modern Fort Wayne, it was reconstructed on a plot of ground less than a quarter of a mile from the original site. It opened to the public on or around July 4, 1976. 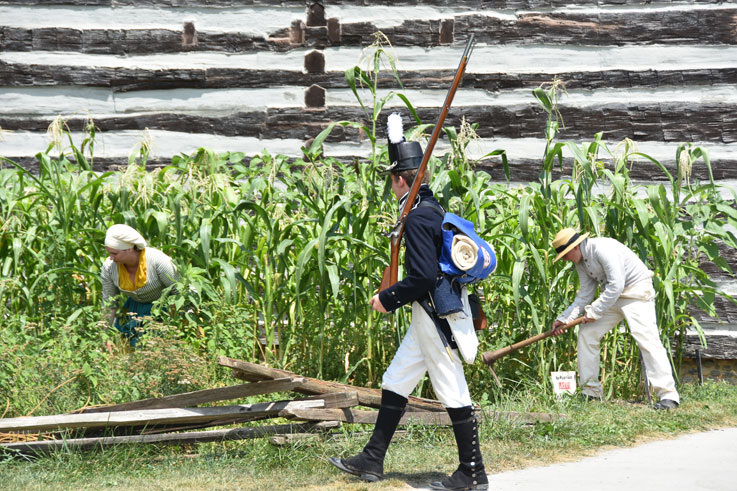 Historic Fort Wayne, Inc took over operations in October 2004. With the assistance of the Fort Wayne Parks & Recreation Department this community asset remains open to the public during certain days and special events held throughout the year. Here, life in the last frontier Army post of Indiana is being recreated.

Historic Fort Wayne, Inc is a 501 not-for-profit organization founded in 2004.  We are dedicated to developing a historically based education program housed in the Old Fort.  Our goal is to educate the community about the Old Fort and its significance to the Old Northwest Territory, the State of Indiana, and the United States during the 17th and 18th centuries through interactive programming.

Most of our events are free to the public. We are a 100% volunteer organization. We do not receive any federal or state funding. Programming is funded by generous private and corporate donations. 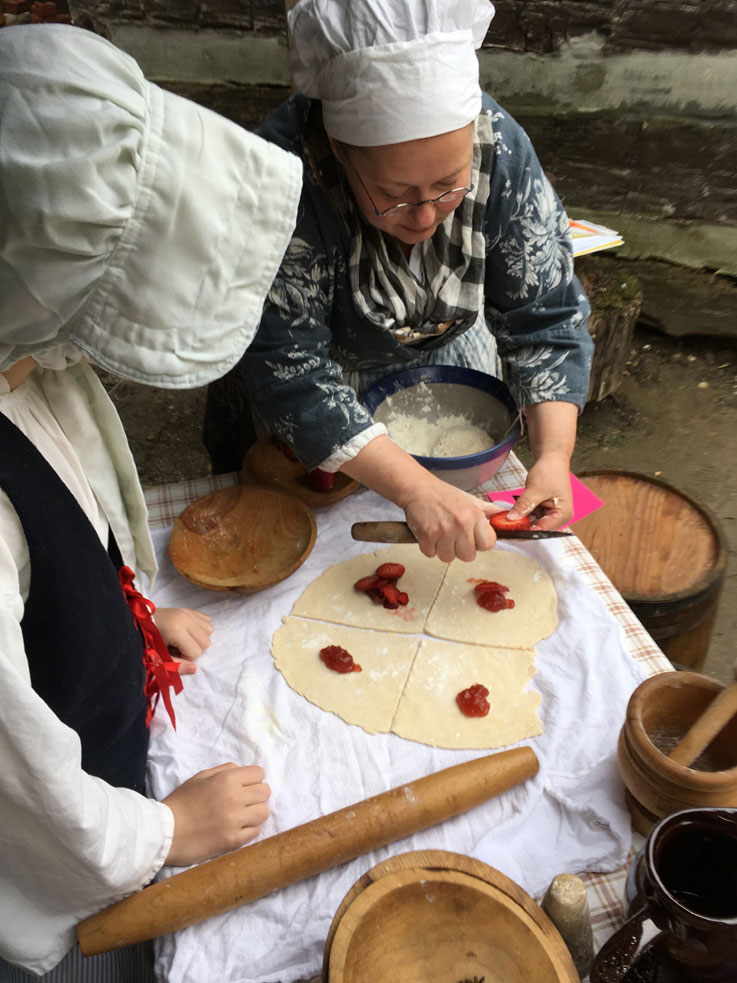 We are excited to welcome visitors to Historic Fort Wayne for the 2021 Season. We continue to monitor the COVID virus information  provided by the Allen County Board of Health Department, the City of Fort Wayne, and the CDC. To ensure everyone’s experience is enjoyable and safe, we ask that you follow the posted Health and Safety Guidelines while visiting the fort.

Parking can be found at Lawton Park and in the lot on Spy Run Avenue across from the Fort. Visitors should use the Rivergreenway Trail under the Spy Run bridge to access the fort.

The Fort can also be accessed by the bridge from Headwaters Park.

Check our website www.oldforwayne.org, facebook.com/HistoricFortWayne, or tune to 1640 AM Old Fort Radio for event and schedule updates. 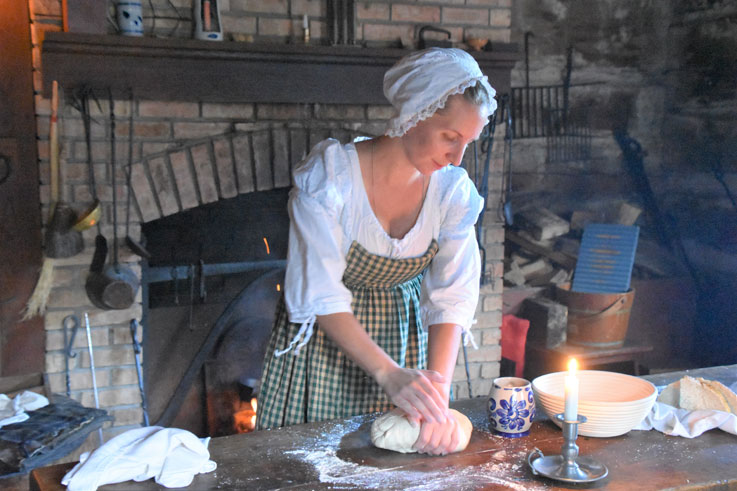 Christmas Through the Ages

Jump in your car, hop on the Holly Trolley (sponsored by the Downtown Improvement District), or hitch up your sleigh. Welcome the holidays with fun and festivities at the Old Fort. Enjoy learning how Christmas was celebrated here during the 17 & 1800s. Artisans present hand-crafted gift ideas. The bakers of the Old Fort offer their wares. Warm up by the fire as we deck the halls. History and the holidays come to life at the Old Fort!

Did you know the first fort in Fort Wayne was built by the French? Why was it built? Who lived there? What did they do there? Visit Fort Saint Philippe Post des Miamis and help celebrate Nouvelle Annee, the new year. See French soldiers, habitants (settlers), voyageurs, and their Miami Native Allies endure the chilly winter months. Native councils, arrests, desertion, and pay call were all part of daily life at Post Miami. See skits reenacting actual historical events from the history of Fort Wayne. Sponsored by Historic Fort Wayne and Les Garrison du Pays den Haut.

A winter posting at a frontier fort was never an easy task! Soldiers had to chop wood for the fireplaces to keep warm. They had to cook their own meals. Military drills and guard duty were part of the daily duties. Visit with the soldiers and feel what it was like to live in a frontier fort during the winter.

Winter on the Indiana frontier? It was never easy! Continental soldiers and militia will be performing daily duties and work details. Civilian refugees and local inhabitants will be plying their trades, cooking, sewing, and mending. Military drills and training will take place weather depending. Warm yourself by the fire and witness how an army survived the winter months on the frontier. 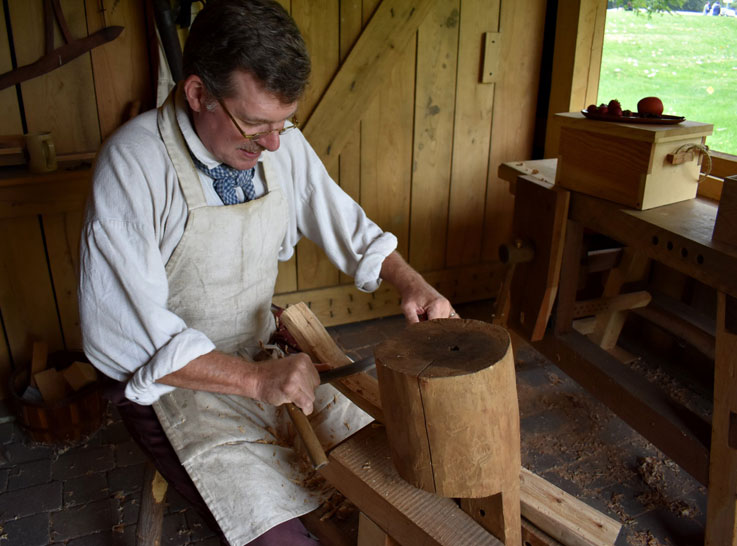 The Fort's woodwright demonstrates his skills during scheduled events at the Old Fort. 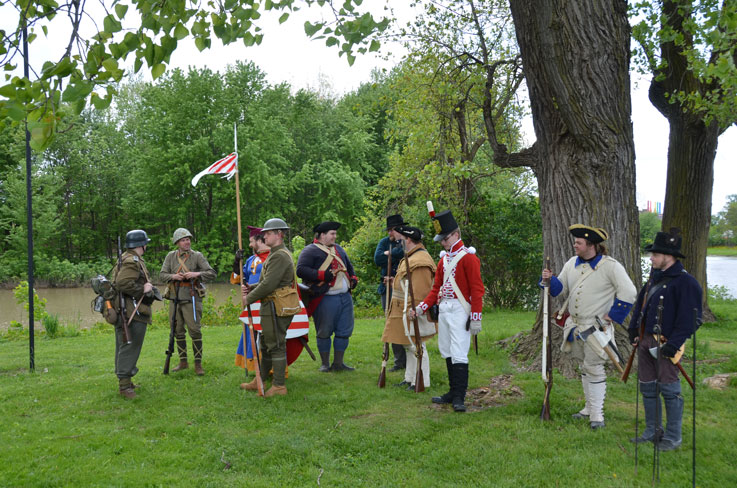 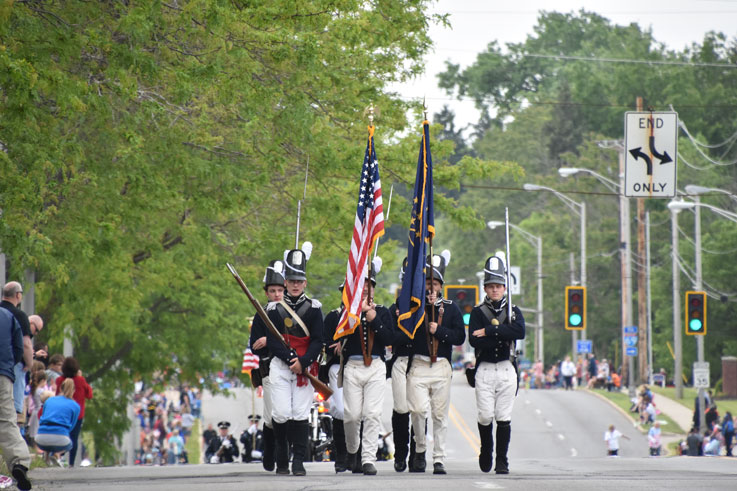 The Old Fort 's Guard carries the Stars and Stripes and the Indiana State Flag during the Memorial Day parade. 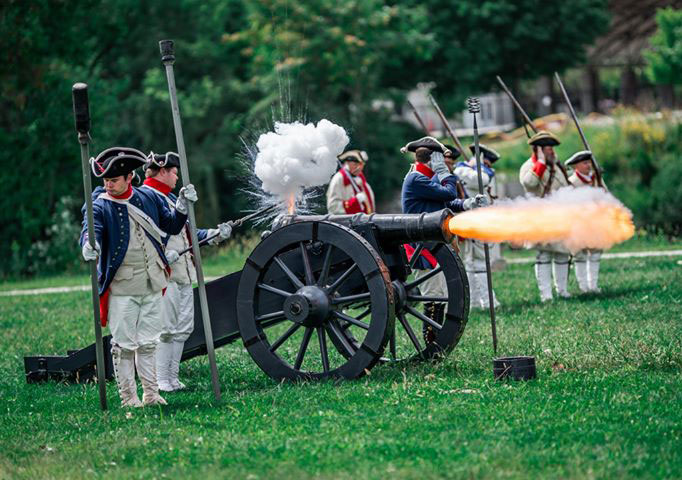 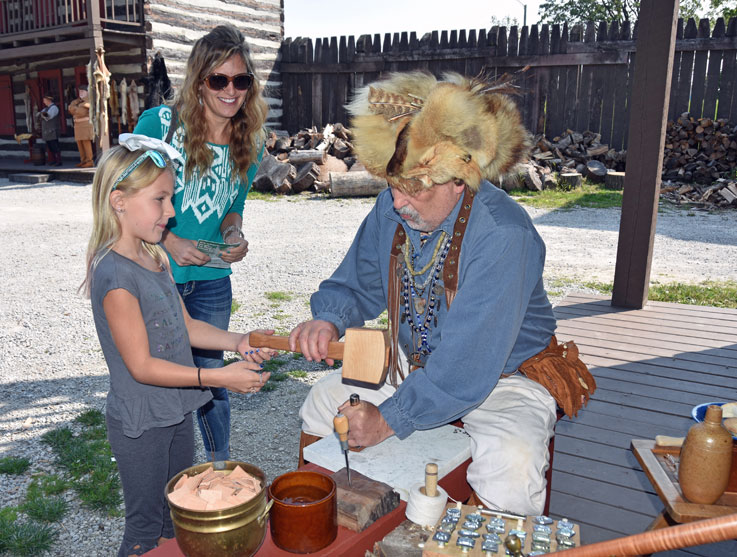 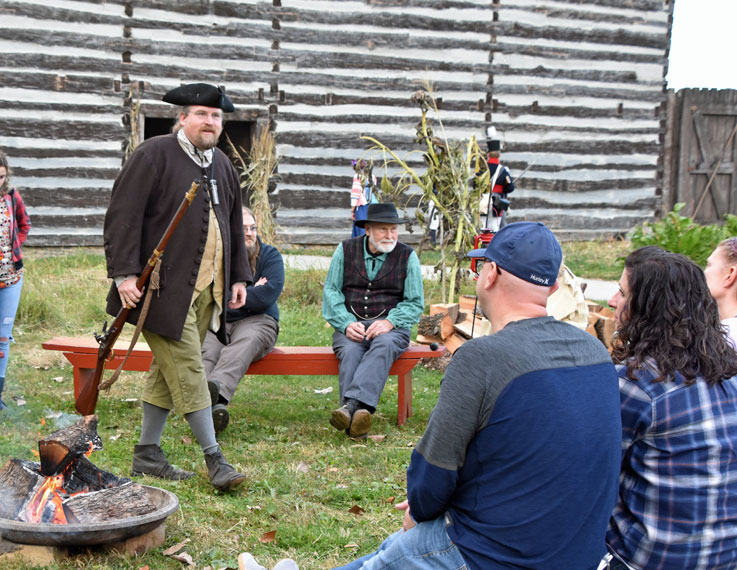 Meeting soldiers and civilians at the Old Fort. 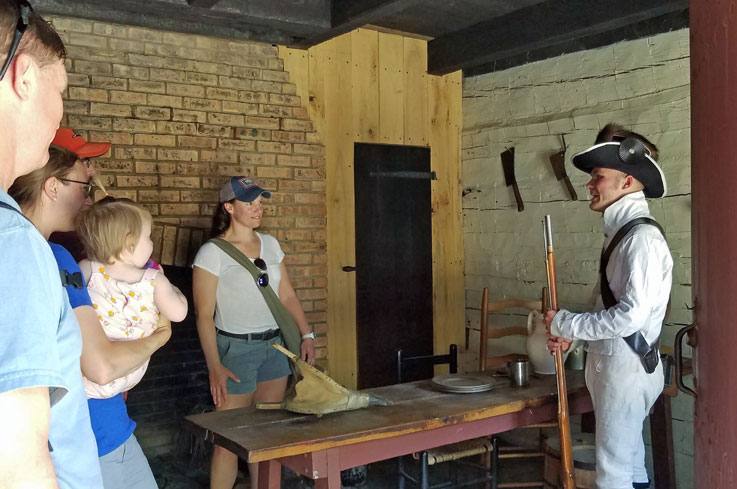 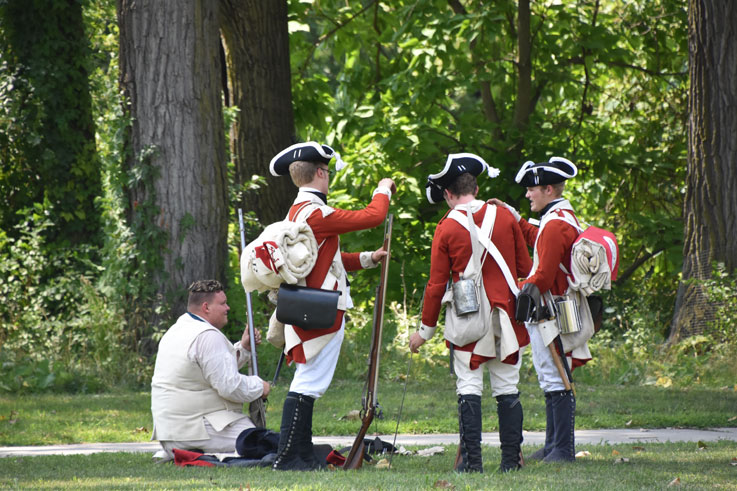